Oh, I am so excited! Football season is upon us! Keep reading as I want to help all the women grasp

the basics of football.

OK, I can hear you know. “Oh great, I have to watch that boring game again. Why do those guys run all around for that stupid looking ball, it’s not even round. More yelling and screaming and I just don’t understand it all.”

Fear not! If this is you, I can help!

Don’t worry women, I happen to be a woman who loves football. I am going to provide an easy to understand, brief explanation to help you understand the very basics of football.

The very basic foundation consists of two separate teams playing and the team with the highest score at the end of the game wins. In the NFL (National Football League), each team is named by their city and nickname. My favorite team is the San Francisco 49ers. They are based in San Francisco, California and their nickname is 49ers as they were named after the settlers who ventured to the San Francisco area during the gold rush of 1849.

The game begins when one team kicks the football to the other team.

A player from the receiving team vs. the kicking team, will catch the ball and run as fast and as far down the field as he can before being tackled to the ground by the opposing team. Or you will see the player wave his hand in the air, which lets the opposing team and the football offical know that he isn’t going to catch the ball. He normally won’t catch the ball if it’s clear back in the end zone/over his head or if he’s about to get plowed over by players of the other team (both good decisions not to).

The field is broken down by yards. When play begins for a team, they begin on a specific yard marking where the ball is placed by the official. Basically, this is their starting position. The team who is running or passing (throwing) the ball must go at least 10 yards in 4 attempts to keep possession of the ball (to keep playing). These are referred to as “downs.” You will see and hear references such as 2nd down and 3 to go. This means this is their second time with the football and they have 3 yards to go before they reach the 10 yard marking.

As you have probably seen or heard, a team can move the ball (by running or catching), a whole lot more than just 10 yards.

These are the most fun and exciting plays in football!

Every time the team reaches or exceeds the 10-yard marking, this is called a 1st down. This is a good thing! This means the team gets another 4 tries to move the ball another 10 yards. Basically, without a lot of unnecessary explanation, this is how the game progresses for each team when they have the ball. And of course, the overall goal is to get a touchdown.

A team can attempt an extra point. This is when the kicker has to kick the ball right between the two tall goal posts. This earns the team an additional 1 point. Or a team can attempt to “go for two.” In this case, a player will either run the football into the endzone or he will catch the football in the endzone. As the name implies, they will earn 2 points. Therefore, after scoring a touchdown, the team will either have earned six, seven or eight points to add to their current score.

This is the gist of the game. However, there are some other points to remember.

One time a while ago, I had the pleasure of taking a good friend of mine to a college football game (yes, my beloved Oregon State Beavers). She didn’t understand the game of football and leaned over often to ask me questions. At one point during the game, when it wasn’t as quite as noisy, she asked me,

“Why does that man keep throwing his hanky on the ground?”

Well, I don’t want to make any of you feel badly, but I laughed so hard I thought I was going to wet my pants. Oh yes, it was that funny (my bad as I’m easily amused). That “hanky” is yellow in color and the officials/referees carry it in their back pocket. When a team and/or player commits a foul/penalty the official will throw what is called a penalty flag or more commonly referred to as a “flag.”

There are so many rules in football that I’m not even going to attempt to explain them. Let me just say that when a flag is tossed by an official, someone did something they’re not supposed to do. The penalty can mean extra yards added to a play or taken away. It can mean the entire team moving forward on the field or moving backward. It can also mean a play has to be done over again or it doesn’t count at all. And for players (or coaches) who can’t seem to play nice, it might mean they get kicked out of the game.

If you want to learn about the different rules of the game then you might want to go check out the NFL’s Rulebook. You will either find it interesting or good reading material to put you to sleep. Either way, it’s good information. Here are the most common penalties: 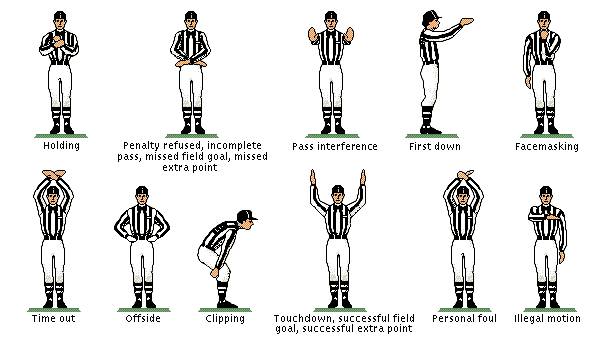 For those of you who already understand American football, then this reading might not have been very helpful for you. However, my wish is that I have taught some of you the very basics of the game so you can watch a game with your spouse, partner, relative, or friend and have at least some understanding behind the numbers on the scoreboard.

For those of you who want to know (or who might be dreading), this weekend is the official start to the NFL season with preseason games. The college football season begins (based on where the game is being played) Saturday, August 27th! Good luck to you and good luck to your team!

If you liked this, please share it! Thank you!

4 thoughts on “Women! Learn About Football”

You can find Julie here.