s though they are singing to music? What about fellow grocery shoppers who seem to be talking to the piece of produce they are examining as they decide which one to place in their cart? Oh yes, you know what I’m talking about because we all do it in some shape or form.

Well, I do it a lot. Shhhh! Don’t tell anyone. The fact is I live alone (with my canine companion, Duke…see this post) and I am finding that I talk to myself more and more often. Am I approaching senility or am I just going crazy? Maybe it’s a little bit of both. However, I always entertain the same question.

Can they possibly understand me?

Yesterday I was in the car with my son. He was driving. We were pulling out of the bank’s parking lot and there was a car in front of us that was moving as slow as an Oregon slug. Oh, believe me on this one, I’m not exaggerating. After waiting for the driver of the vehicle to do something, I finally reacted with no thought whatsoever. I stated, “What are you doing?” My son stated to me, “I’m waiting for the car.”

“I know you are, ” I stated. “I am talking about that car,” as I pointed to the car in front of us. I forgot my son was even in the car and was embarrassed that he thought I was speaking to him. My window was down and I certainly didn’t want the other driver to hear me. Oh my! But suddenly, the vehicle moved. Do you think they understood me? Maybe they received my message through a particle of dust traveling in the slight breeze that day. Hmm?

Several days ago an unfortunate event happened in my day that caused me a significant amount of hurt feelings. Being an overly emotional female with BPD, I came into my house and sobbed. “Duke, why does this always happen to me?” Once I stopped sobbing, I continued this conversation with my dog. Well, I don’t know if it qualifies as a conversation because it was very one-sided. I always wonder if he understands what I’m saying. He IS a good listener. PS-no sympathy needed. A good cry works wonders!

There has been a lot of one-sided conversations this week. Maybe I should see my doctor, I’m not sure. But, several days ago my vehicle wouldn’t start. My son was in the driver’s seat and as he turned the key to begin our voyage, the engine wouldn’t turn over. STRESS! He tried several times. Seeing as though I’m older than he is, I always automatically assume that I’m also smarter and wiser (mistake!).

And so I stated, “Let me give it a try.” Another one-sided conversation began. “Oh, come on van. (Yes, I’m one of those middle-aged mothers who drives a mini-van.) Come on van, you can do it. Please start, van. I love you. I promise to wash you today. Oh please van, I’ll do anything you want. Preeetttyyyy pleeeeease!”

My van must not have understood what I was saying. She never started. Don’t worry though, I figured out she needed some fuel and I was then able to satisfy her request. Away we went after that! (just so you don’t think I am getting senile, my gas gauge is broken) 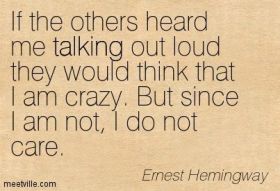 I have lived alone for quite some time now and due to my social anxiety, I tend to keep to myself a lot and not engage with others. Maybe I’m not going crazy, at least not any more than I am already. I am getting older, but I’m pretty sure I don’t have any of the early signs of dementia. I mean, come on! I’m not that old! It does seem as though I need to get out with some people a little more often, though.

This morning, I accidentally hit my elbow on the wall because I wasn’t paying attention to where I was walking. Yes, you guessed it. I began to have a conversation with the wall. I really don’t get angry any longer. So I spoke to the wall as the victim. “Wall, that hurt. Why did you do that?” (this is me laughing at myself and shaking my head)

I would LOVE to hear your thoughts and stories. Do you think they understand you?

If you liked this, please share it! Thank you!

13 thoughts on “Can They Understand Me?”

You can find Julie here.